A site I work with uses Nexus 9000 series switches in their datacentre. I don’t really have much operational experience with NX-OS so was very happy to recently discover that Cisco has a freely downloadable virtual version of the Nexus 9000 software. With Cisco’s long term strategy seeming to be pushing the 9K’s into the access layer I feel it is wise to get up to speed on the capabilities and nuances of this OS.

Though it does not implement the full set of features, the interface throughputs are rate limited to 4Mb, and there is a limit of 64 interfaces, it has enough to make it very useful for modelling and testing various configurations before they are pushed into a production environment (’cause who has a couple of 9K’s just sitting around to play with?).

Though the setup process was fairly straight forward there were a few gotchas so this post will detail the process I used to deploy the NX-OSv 9000 into my home ESXi based lab.

First step is to obtain the software from the Cisco site. You need a Cisco login to access the download however there are no additional entitlements required.

There are two options for ESXi, an OVA and a VMDK.

The OVA option is the simplest so that is what this post will be based upon.

I am going to use the vSphere thick client for the various ESXi operations, this is very naughty as we have been told many times by VMWare that this will be removed in a future release and many new features have not been implemented in the thick client.

When the HTML5 client is as fast and reliable as the thick client I will use it exclusively, however until that day I only use it when access to a particular feature requires it.

Deploy the OVA as you normally would, at the Network Mapping screen you will see a warning regarding having multiple source networks mapped to the same host network.

The first network adapter defined in the VM will be mapped to the NX-9000v management interface mgmt0. Subsequent VM network adapters will be sequentially mapped to NX-9000v data interface ports Ethernet1/1, Ethernet1/2, Ethernet1/3 etc. The management interface MUST be kept separated from the data interface ports and you must be very careful mapping NX-9000v data ports to vSwitches that house other hosts or connect to physical switching infrastructure as they will participate in STP, generating BPDU packets and forwarding broadcast and multicast traffic. Could get messy…..

At this stage just make sure you change the mapping for mgmt0 to an appropriate Destination Network that will be accessible via SSH later on for configuration. 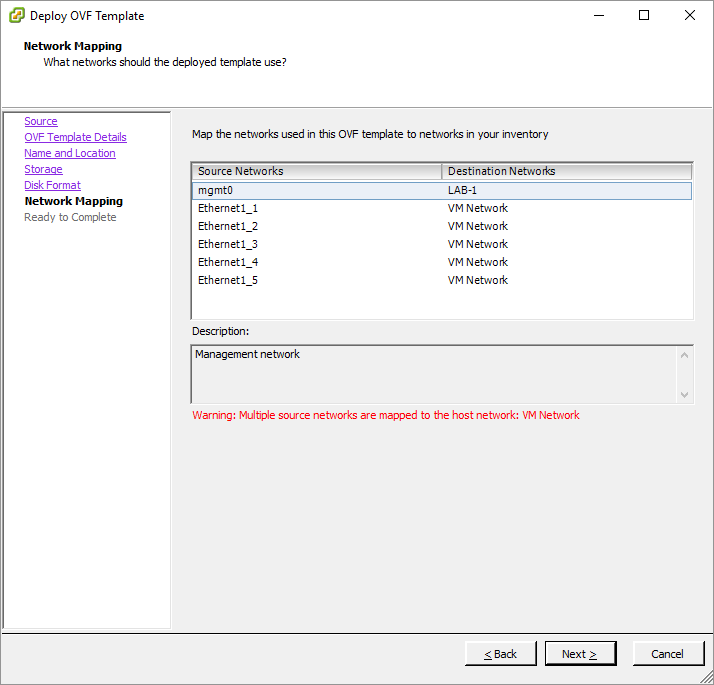 Make sure the “Power on after deployment” option is NOT ticked at the last page and kick off the deployment.

When the deployment is completed, go into the configuration tab of the ESXi host and add a new vSwitch that is not connected to any physical adapters. Make sure you set Promiscuous mode to Accept and set the network to accept all VLANS.

Now edit the properties of our newly deployed NX-9000v and configure Network Adapters 2-6 to connect to the new vSwitch we have just created. This will ensure we don’t cause any problems upstream when we power on. Down the track I will create a vSwitch for each NX-9000v port that I wish to use and they will essentially become virtual cables, if I want to connect a virtual host or another instance of NX-9000v I just connect them to the appropriate vSwitch.

Now for the first gotcha.

To work around this you will need a Windows VM running on the same ESXi host as your new NX-9000v. What we will be doing is mapping the serial port to a named pipe that will allow us to get to the console port of the NX-9000v using a terminal emulator on the Windows VM.

Add a Serial Port to the NX-9000v VM and set the media to named pipe.

Configure with the following settings: 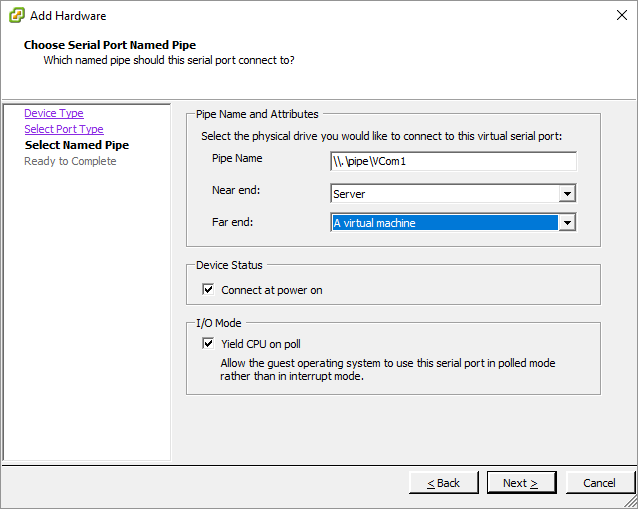 Now we need to add a named pipe Serial port to the Windows VM.

This time we configure with the following settings: 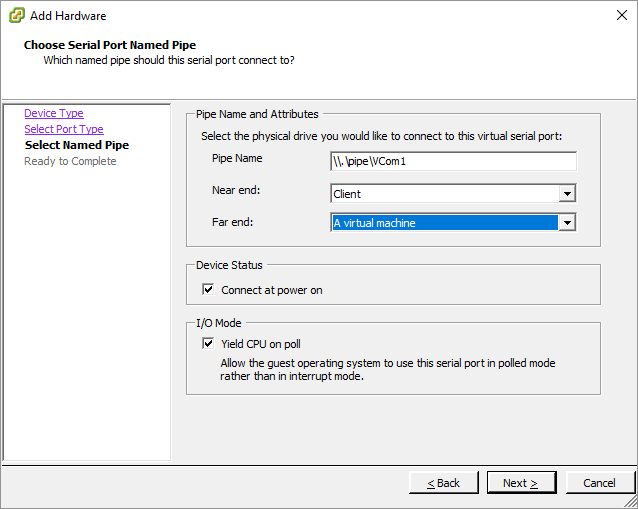 Connect to COM1, hit Enter a few times and you should see the console of the NX-9000V complaining about a POAP failure.

Hit Enter and answer Y to abort POAP and start the setup process.

The default options should be fine, make sure you enter an IP address that is appropriate for the network that you have mapped the management port mgmt0 to.

When you have finished the initial setup process, you need to configure the boot image. If you don’t do this, when you restart the NX-9000V it will stop at the loader> prompt and will not boot.

Log into the switch and enter the following command:

In the output, look for a file called nxos.<something>.bin, this will vary depending on which version of NX-OSv 9000 you downloaded.

Enter the following commands, substituting nxos.<something>.bin with your version of NX-OSv 9000

You should now be able to access the NX-9000V via SSH from the comfort of your management PC.